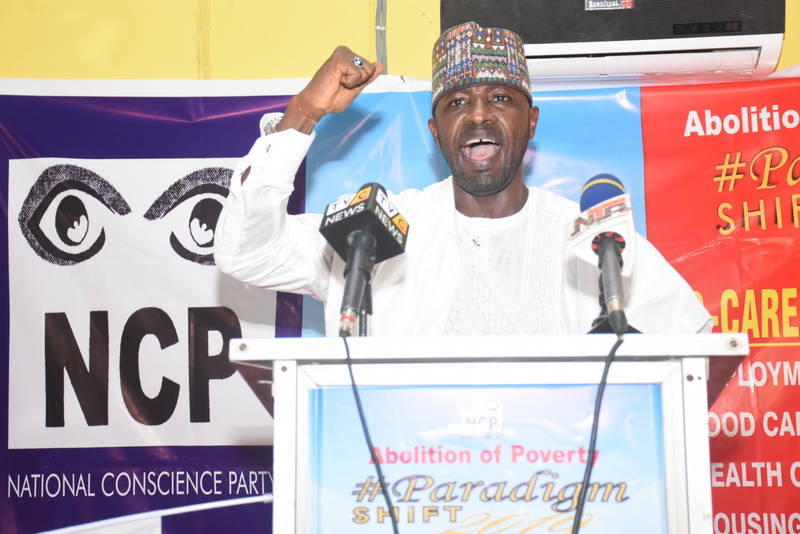 A former Vice Presidential candidate on the platform of the National Conscience Party, Dr. Yunusa Tanko, has declared his intention to contest the 2019 Presidential election under the same umbrella.

Making the declaration before a full house of pressmen at Kudirat Abiola Way, Oregun, Lagos, the man who was running mate to frontline publisher, Bashorun Dele Momodu in the 2011 Presidential election, highlighted 10 care programme that he will introduce which will cater for and not only add value ‘to our egalitarianism but also emphasize the missing human capital development that have long eroded us as a people.’

He presented the 10 care programme to include employment, food, health, housing, Education, Water, Electricity, Transportation, Telecommunication and Security, while noting that “the state of insecurity is compounded by executive lawlessness’ and blamed the government of the day for having no answer to “mounting ethnic intolerance, ethnic violence, communal clashes, religious mayhem, police-induced violence and extra-judicial killings.”

Born in Kano, Dr. Tanko was the Vice Presidential candidate of the NCP, a party he served as its National Secretary prior to his nomination.

He attended the Army Children School, Ikeja between 1974 and 1981 before proceeding to Ikeja Grammar School for his secondary education, and obtained his certificate in 1985. In 1992, he was awarded a HND degree in Marketing from the Kaduna Polytechnic, and followed it up with a Post Graduate diploma in co-operative Studies from the same institution in 1994. He also has a degree in Accounting from Nuhu Bamali Polytechnic, Zaria, a Post Graduate diploma in Management from Ahmadu Bello University, Zaria as well as an MBA from the same institution.

He was the Deputy National Chairman of the NCP for 10 years, from where he ran with Dr Osagie Obayuwana in the 2007 Presidential election among many other political and circular portfolios which he handled without blemish.

Dr. Tanko joins the long list of Nigerians who believes that there is the need to unseat the incumbent, President Muhammadu Buhari.

In attendance at the declaration were son of the Founder of the party, late Chief Gani Fawehinmi, Mr. Mohammed Fawehinmi; Alhaji Balarabe Musa, Mr. Kayode Ajulo, Mr. Femi Aborishade among others

I’ll Surrender to the Police – Melaye