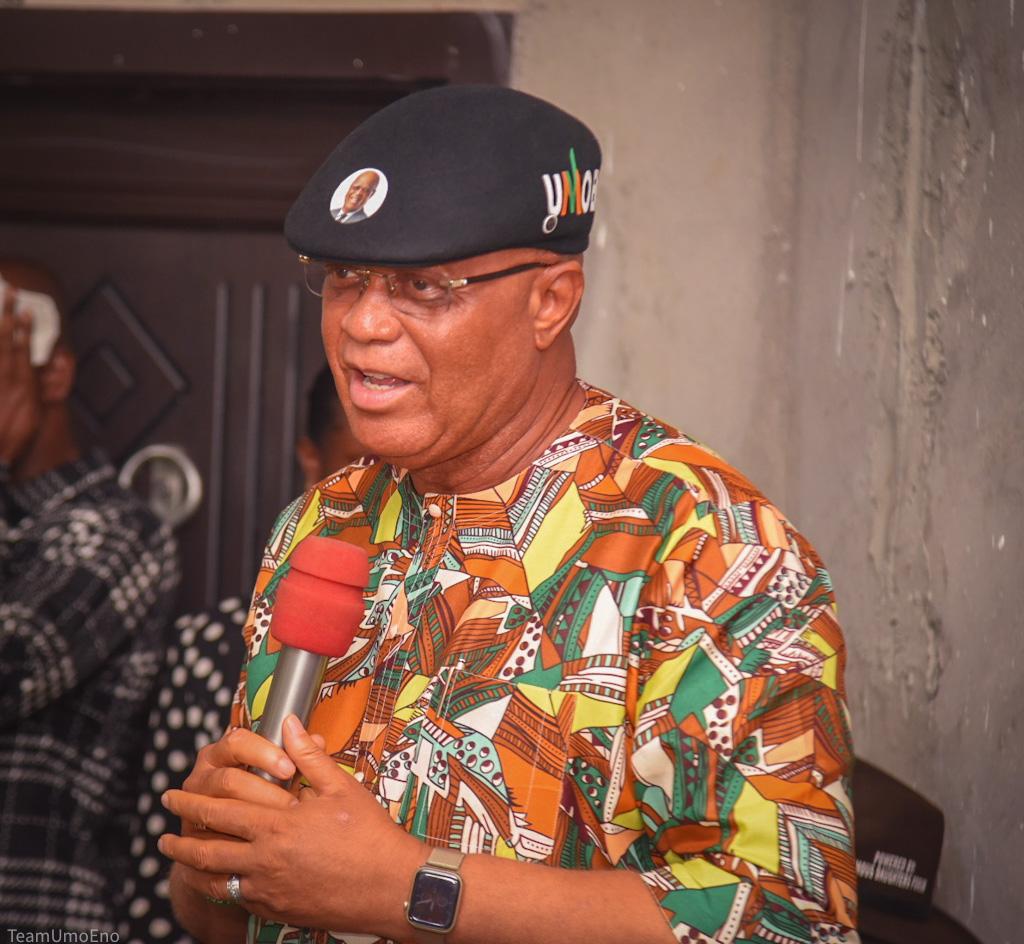 The Peoples Democratic Party, ( PDP) gubernatorial candidate in Akwa Ibom State, Pastor Umo Eno has stated that he had not been declared wanted or convicted by any court in Nigeria.

Reacting to a social media story about his purported conviction at a campaign rally in Ika LGA today, the seasoned businessman said he never received any court summons and it was impossible to have been declared wanted since December 23, 2022 by an Abuja Magistrate Court and he would been everywhere campaigning.

He revealed that the alleged conviction and bench warrant was a fabrication concorted by his opponents to frustrate his gubernatorial ambition which has gained traction across the state.

Pastor Eno said that rather than deter him, these kinds of action will further propel him to intensify his campaign and engage the people.

According to him, instead of the opposition in the state to sell their programmes and vision to the people like he has been doing, they are busy looking for short cuts to victory and instigating violence.

He noted that he was not like one of his opponents who has been convicted for 7 years for an offence of corruption instituted by the Economic and Financial Crimes Commission ( EFCC) in 2014 and no.one should associate his name with any wrong-doing.

Pastor Eno who had earlier visited the Paramount Ruler of Ika LGA,HRM Edidem Okosi Joseph Ekot III affirmed that Akwa Ibom people will overwhelmingly vote for him and all other PDP candidates, noting that the people will not allow a criminal or convict run their state as governor.

Also speaking about the viral story at the rally, his lawyer, Uwem Nwoko, SAN insisted that if there was such a case or warrant, he would know about it.

He stated that Umo Eno has unimpeachable character and this story should be dismissed by all right-thinking and serious- minded Nigerians.

Speaking about his plans for Ika LGA,  Pastor Eno said he has already conducted an independent needs assessment of the area.

He affirmed that when voted into office, he will build an oil palm factory in the LGA and support the people to take advantage of the full agricultural value chain.

Furthermore, he revealed that his focus will be rural development. Therefore, he will encourage rural farmers, build primary healthcare facilities, revamp educational institutions, ramp up rural electrification and roads.

At the energetic event, Pastor Umo Eno promised that Akwa Ibom will witness its golden years with him at the helm of affairs. He encouraged all present who have registered to go and collect their PVC.

The event was attended by Akwa Ibom State Governor, Mr Udom Emmanuel, who was represented by his Deputy Governor, Mr Moses Ekpo, PDP chieftains, traditional rulers and thousands of supporters.

2022 and Landmark Events that Shaped History