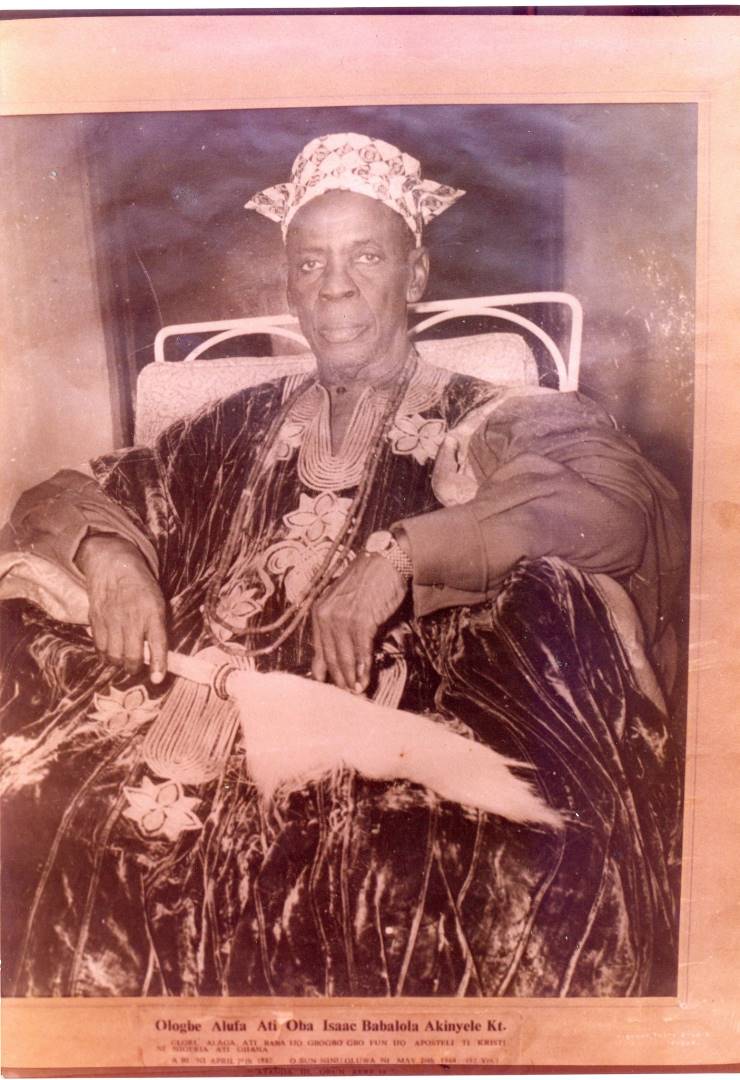 Ibadan fascinates me. Its history, size, opulence and accommodating nature is enchanting and exciting. Ibadan supports non-indigenes to thrive on their legitimate businesses, and this is why non-indigenes are almost more than indigenes:

Ibadan from its early history, has always been circumstantial and cosmopolitan. It is undisputable, that Lagelu, the Yoruba Warlord and Generalissimo was its founder around 1829. It became a British Protectorate in1893, after a treaty, signed by Baale Fijabi, the then Baale of Ibadan, with the British Acting Governor of Lagos, George C. Denton on15th August, 1892.

Ever since, Ibadan has grown to become then, the third most populated city in Nigeria. As a matter of fact, it was hitherto, the most cosmopolitan city in Africa.

Bolude, an Ibadan warrior, during one of the many war campaings in Ibadan, an herbalist, who practiced the traditional Yoruba religion of repute, in the years of Ibadan militocracy, had Josiah Akinyele as its first son. Josiah was one of the early converts under the auspices of David Hinderer, the German leader of the Church Mission Society (CMS) and his team of six missionaries that first brought Christianity to Ibadan in1851.

Josiah Akinyele took Abigail Lapeno, the daughter of kukomi, another powerful Ibadan pagan warrior, who also was converted to Christianity through Hinderer; as his second wife in1870.

Between the two brothers, they bestowed the environment of Ibadan in the field of education, religion, social responsibility and politics, each like a colossus.

The recent call by some notable monarchs in the Yoruba nation, against idolatry, fetish and occultic practices, is certainly not new.

With the example of the Akinyele brothers, Ibadan people began to take the issue of their education, seriously, to the extent that in 1901, a proclamation was made by the incumbent Olubadan- Baale Fajinmi, (1897-1902), that made it compulsory for every household, to send at least one child to school or pay a fine of 5 Pounds.

Bishop Akinyele visited Salami Adebisi, to encourage him and also intimate him, on the prospect of gaining a university admission for his two sons in Europe, who had just left his college, with the hope that it would be an encouragement to other Ibadan wealthy men and elites.

But Adebisi, whilst thanking Bishop Akinyele for his concern and also acknowledging his episcopal visit, told the Bishop and Principal, that he would not like to expose his children to the danger associated with schooling abroad. According to him, the man of means would always employ the man of knowledge.

Oba Isaac Akinyele, was a Minister of State without portfolio, in the Government of the Western Region in 1961.

Before he became the Olubadan, he was the President of the Christ Apostolic Church. His elder brother- Alexander Babatunde Akinyele, born in 1875, was also the first Ibadan University Graduate and First Anglican Diocesan Bishop of the Ibadan Diocese.

In 1914, he formed the Egbe Agba O’tan, alongside his brother- Alexander Babatunde Akinyele, clearly a precursor of the Egbe Omo Oduduwa. When he was appointed the Balogun of Ibadan land, which entails the holding of a ceremonial staff of office, which is to be anointed with sheep’s blood, every week, a failure to do so, was believed to bring death, upon the disdainer of this tradition.

Isaac Babalola, had a Christian staff, rather made with a cross, affixed on its top. Upon his assumption of office as the Olubadan of Ibadan, on the 17th of February, 1955, he pronounced a total disdain for the Isese religion.

Several times, his faith was tested by ritualists and herbalists. One day, after settling disputes brought to the palace, in the presence of the chiefs, unknown to him that charms have been sprinkled on his seat before he came in. He couldn’t stand up from the seat, glued down, the chiefs began to mock him, where is your God? But you claimed that he has all power. The king looked at them, he started reciting Psalm 24 and at the end, he said “I rise up in the name of JESUS!” and moved his body, immediately, the charm was nullified. The chief went home ashamed, most of them later gave their life to Jesus. Another instance, was a year that a horse was to convey him to a ceremony, unknown to him, the occults in the city had placed a charm on the horse. They employed drummers who beat the drum with charms, to make the horse die while carrying the king.

Actually, the standing order was that the horse must not fall or die conveying the king, else the king would be rejected. The whole city was watching as the horse began to misbehave and started crying with water gushing out of its eyes.

Fear gripped the whole city, there was great jubilation among the occult men, because they thought that the end has come.

The whole populace erupted the song started by Baba Babajide, dew began to fall during mid day, and the horse began to walk majestically and gracefully.

When Baba Akinyele was conveyed to the end, the charmers had no choice than to surrender to the kingship of Jesus and since that day, they stopped engaging Oba Isaac Akinyele.

Oba Isaac Babalola Akinyele was a great adherent of the contextualisation and acculturisation of the Yoruba believes.

In similitude, Oba (Dr.) Adedapo Adewale Tejuoso, is another monarch, who is an unshakable believer in Christ. He was born in 1938 and ascended the stool of the Oshile of Oke-Ona in 1989. He believes in serving the supreme God- Olodumare. This outstanding man of God, on the throne of his fore-fathers has shown great capacity and wisdom, in accommodating the traditional demands of a stool, between idol worshipping and culture.

A few years back, he cut down the effigy of the Obatala idol, in Karunwi’s compound, Ago-Oko Abeokuta, to be destroyed in the full glare of the public.

He enjoined all persons, to do the same in their various houses, if he- the king was still alive after 7 days of cutting down the Obatala effigy. This was on his birthday, on the 19th of February, 2005.

“Sango is my son, so why should I start worshipping my son. People worship all sort of things, but I worship God, who created us. Why would you want to leave the Creator and serve a thing that a human being created or somebody that God created?

The Oluwo of Iwo- Oba  Abdulrasheed Adewale Akanbi (Telu I), shortly after his ascension to the stool of his fore fathers on the 16th of January, 2016, removed the effigy of Ogun, at the frontage of the palace, that was said to have been as old as 800 years.

He personally supervised this removal, drove and accompanied this Ogun effigy, called Ogun Ale, to its new home in Ogundigbaro.

May the colony of these class of non-fetish and non-idolatory Yoruba Obas, continue to swell in this modern age of education and enlightenment.

May the soul of Oba  Isaac Babalola Akinyele continue to find peaceful repose with the Lord.

Hon. (Barr.) Femi Kehinde is a Legal Practitioner and Former Member of the House of Representatives Representing Ayedire/Iwo/Ola-Oluwa Federal Constituency of Osun State (1999-2003)

Opinion:Christmas Tidings and the Year Ahead