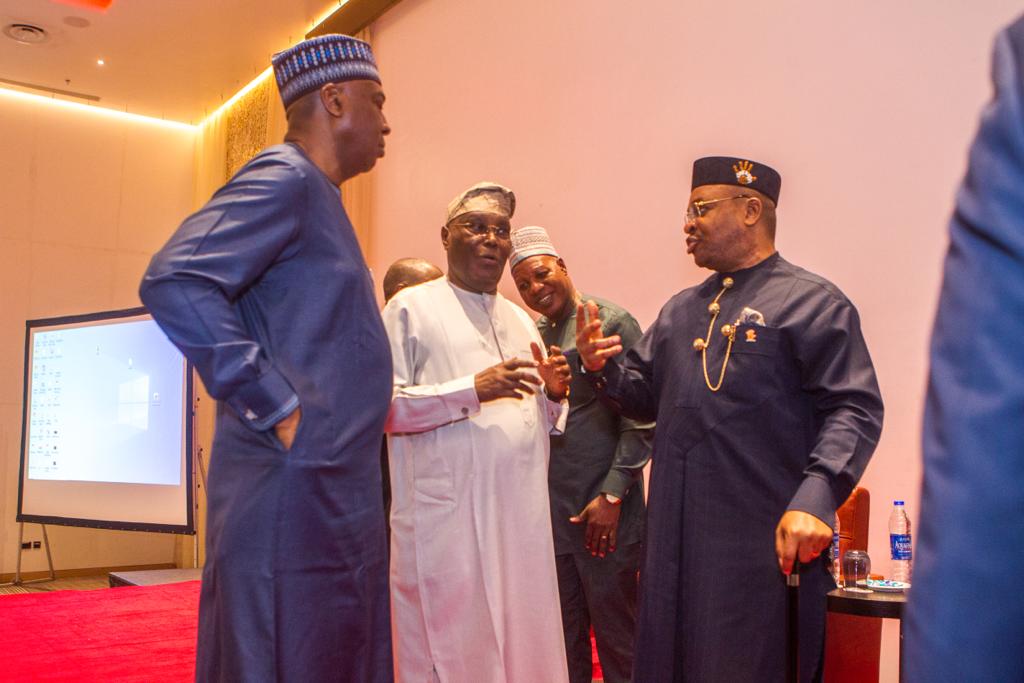 By Michael Effiong James
Former Vice President and Peoples Democratic Party, ( PDP) Presidential candidate, Alhaji Atiku Abubakar has stated that his decision to unify the country is key to taking the country out if its present state of hopelessness.

Speaking at an interactive session with the Nigeria Guild of Editors in Lagos, Atiku said his plan will include a combination of restructuring, equitable distribution of positions and formation of government of national unity.

He noted that presently almost all the heads of the security outfits in Nigeria are from the North and that is bad.

” I will not make such a mistake, there are brilliant and efficient people from all parts of this country and our government will be equitable in choosing those to head these outfits in a way that will give every zone a sense of belonging”.
He revealed that his agenda seeks to restore Nigeria’s unity through equality, social justice, and cooperation among various people.
He noted that he has been the most consistent advocate of restructuring even when it was not popular and that restructuring will also involve devolution of powers.
Atiku noted that his proposal will also include some form of economic restructuring and reengineering of resource control.
Atiku also revealed that if elected, he would form a government of national unity like was done in 1999 by President Olusegun Obasanjo who incorporated the opposition despite the fact that PDP won overwhelmingly.

On job creation and the security, Atiku who said he would send a bill on restructuring to the National Assembly from his first day in office, noted that with devolution of powers will come devolution of the security architecture which will lead to more people being employed to the police and armed forces at the state and local government levels.
He said this will lead to more boots on the ground, more training and more employment opportunities.
Speaking on the inclusion of women in his government, Atiku said that his government will not have less than 30 per cent women representation.
He called on Nigerian women to vote for him because he has the best deal for women as contained in his manifesto.
Speaking on the manifesto which is tagged” “Covenant With Nigeria” He stated that it has a 5 points agenda:Economy, National Security, Restructuring, Anti-corruption and job creation.
The former Vice President, said the document will build a strong and prosperous economy, creating jobs and wealth as well as lifting millions out of poverty

The presidential aspirant said he intends to break government monopoly in all infrastructure sectors, including refineries, rail transportation and power transmission and get private sector involvement.

According to him: “If you look at the thriving economy in the world, they allow the private sector to run the economy. If you see the amount of work the government has to do in terms of constructing and decongesting our ports, railway, and you have to borrow, I will rather concession most of these projects to the private sector and give them tax incentives. This will bring progress, prosperity and peace”.
The former Vice President lamented the failure of the current APC leadership, leading to hardship, which he said was staring everyone in the
Atiku also vowed to uphold press freedom if he wins the 2023 presidential election.

Giving accolades to the Nigerian media, he said: “I want to pay tribute to the press for their role in the restoration of democracy in Nigeria. Many of you have sacrificed your life and career.”

He informed the editors that he sees himself as a true Nigerian in every sense mainly because he has spent the greater part of his career in the south and as such, he knows the south as much as he knows the north.

He noted that he will improve and strengthen the education system and equip students with all necessary skills “required to be competitive in the new global order which is driven by innovation, science, and technology.”

Delivering the vote of thanks,  the Director-General of  PDP Presidential Campaign Council, Governor Tambuwal, thanked the media for their role in deepening democracy in Nigeria and urged the media to be apolitical while reporting all sides of the divide as we head towards the general election.