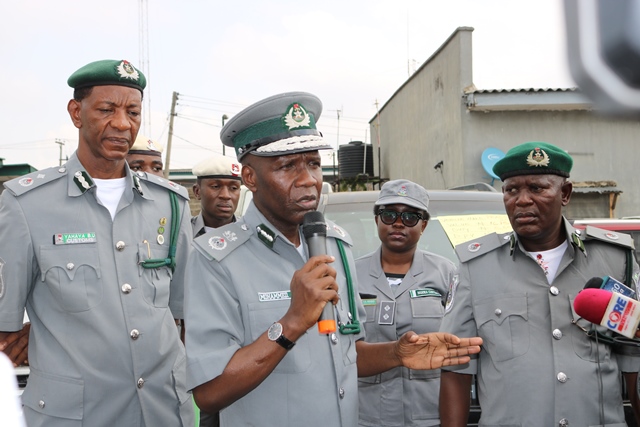 The Nigerian Customs Service (NCS) Federal Operations Unit, Zone A, has again recorded another giant stride in its efforts to checkmate smugglers and across border crime with the interception of various contraband, goods and vehicles with a duty paid value of One Billion, Three Hundred and Forty Five Million, Five Hundred and Seventy Two Thousand, Three Hundred and Thirteen Naira, (N1,345,572,313) with four weeks spanning the period May 16 to June 12, 2018.

This was revealed by the Controller, Federal Operations Unit, Zone A Comptroller Mohammed Uba during a press briefing in Lagos.

Uba noted that the seizures were made possible as a result of the reinvigorated efforts of the unit towards anti-smuggling, adding that in the same vein, a total of Fifty Nine Million, Five Hundred and Six Thousand, Seven Hundred and Seventy Three Naira, Twenty Five kobo (N59,506,773.25) from underpayments were also recovered.

This brings to a cumulative of One Billion, Four Hundred and Five Million, Seventy Nine Thousand, Eighty Six Naira only (N1,405,079,086) intercepted within the weeks under review.

In addition, there are 9,049 bags of foreign parboiled rice in 15 trailers, 1,464 cartons of frozen poultry products, 870 jerrycans of vegetable oil, 273 bales of used clothing, 592 pieces of used tyres, among others.

Speaking further, Comptroller Uba informed that the unit has re-strategized its operational modalities, beaming its searchlights along waterways. This he said was responsible for the massive rice seizure within the period.

While promising the continue to make life unbearable for smugglers and those who chose to live by criminal means, Uba expressed his gratitude to the Controller-General of Customs, Col. Hameed Ali (rtd) tor his leadership roles and logistic support, men and officers of FOU Zone A, for staking the lives in the fight against smuggling and smugglers and the press, who had been in the forefront of sensitising the public.

“Their resilience and doggedness is highly commendable,” he said.

‘Ortom Will Lose if He Re-Contests under APC’