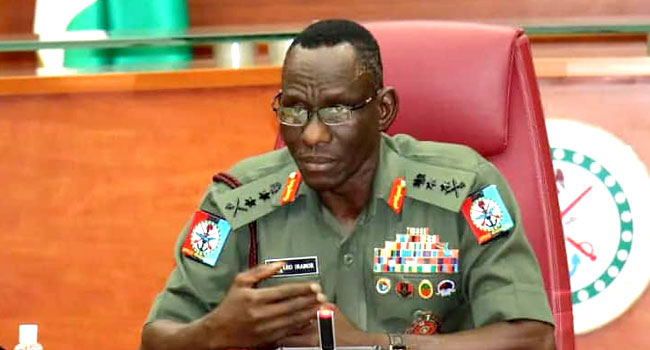 The National Security Council, on Friday, said sub-national governments have no power to acquire arms and ammunition for their various security outfits.

The Chief of Defence Staff, General Lucky Irabor, revealed this to State House correspondents shortly after the NSC meeting chaired by President Muhammadu Buhari at the Aso Rock Villa.

Irabor, who spoke alongside the Minister of Interior, Rauf Aregbesola, said no state security outfit would be allowed to bear arms without undergoing the proper procedure.

This follows a one-month ultimatum issued by the Benue State Governor, Samuel Ortom, who, on Thursday, threatened to procure AK-47 rifles for the State Volunteer Community Guards if his people endorsed it.

Ortom spoke during the passing-out parade of the second batch of the State Volunteer Community Guards in Makurdi, the state capital.

He lamented that the Federal Government had yet to approve his request to procure automatic assault rifles.

“If there is no reply in the next one month, I will revert to my people to advise on what to do because the Federal Government is complicit on the issue of herders’ attacks on the state,” said Ortom.

In August, the Zamfara State Government revealed plans to procure at least 7,000 guns for operatives of the Community Protection Guards, who will be deployed in rural communities and villages to protect residents from bandits.

Ondo State Governor, Rotimi Akeredolu, had earlier faulted the Presidency for allegedly approving weapons for the Katsina State Security Outfit while the Amotekun Corps in his state was denied such opportunity.

But the Presidency has remained firm, saying “no state has approval or authorisation for automatic weapons.’’

“Under the existing regulations, only the Office of the National Security Adviser can issue such authorisation, upon proper clearance by the President and Commander-in-Chief. At this moment, no such approvals have been issued to any state government.

“In the specific Katsina State often cited, the Governor, Aminu Bello Masari wrote to explain that the administration invited the Provost of the Civil Defence Training College in Katsina to train their Vigilantes for five days in the handling and operations of pump action rifles,’ emphasising that ‘’the vigilantes were not trained to take over the responsibilities of the security agencies of the Federal Government of Nigeria but to assist them,’” the President’s spokesman, Garba Shehu, said in a statement in September.

Echoing the government’s stance on Thursday, the CDS said, “you do not ask for what you do not have the power to acquire.”

“No state has been given a licence for that (automatic AK-47 riffles). And the sole responsibility of licensing lies with the federal government agencies. Also, it is to be used by government security agencies and not quasi-security forces. So, you do not ask for what you do not have the power to acquire,” the CDS insisted.

The interior minister, Aregbesola, explained further, “Let’s first debunk the insinuation and false information that state governments have been empowered to arm any of their security outfits.

The Council also directed the Offices of the National Security Adviser and Secretary to the Government of the Federation to convene a “strong team” to investigate the rising spate of crude oil theft in the Niger Delta and expose those behind it.

Atiku to Feature in Arewa Dialogue in Kaduna