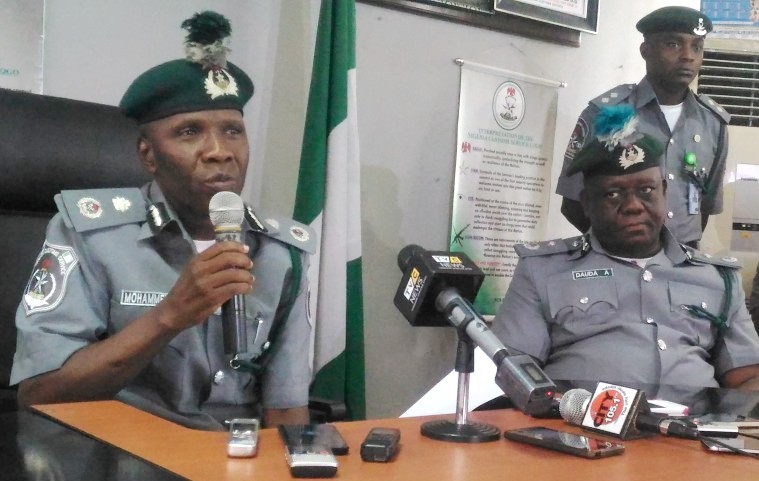 The Federal Operations Unit, Zone A, Ikeja of the Nigerian Customs Service, has announced that as a result of its reinvigorated efforts in anti-smuggling in the South West zone, it has intercepted various contraband items with a duty paid value of Two Billion, Fifty Five Million, Three Hundred and Twenty One Thousand, Three Hundred and Eighty-Nine Naira Eighty Four Kobo in just two weeks between July 25 and August 7, 2018.

Addressing pressmen on the seizures in what appears to be his farewell address as the helmsman of the unit, Comptroller Mohammed Uba, said the items cut across various standards ranging from food, automobiles, drugs, wears and many more.

Notably among the items seized were 2, 748 cartons of DSP codeine cough syrup and 95 cartons of Chaka pain Xtra being conveyed in a MAN truck along Afromedia Estate, by Egbeda Junction valued at N1, 175, 200, 000.00. In addition, 49 cartons of tramadol were evacuated from a warehouse in Ajao Estate. Uba hinted that all seizures were products of intelligence gathering.

Among other major seizures the Customs chief presented to the press were 21 sacks of pangolin scales, weighing 1,031kg and four pieces of elephant tusks weighing 29.35kg, evacuated from a shop in Tejuoso Market by a team led by AC Mutalib Sule. The items have a duty paid value of N253, 566, 056. 07.

Other items the Controller showcased included one ford transit bus, which was intercepted along Olorunda axis of Ogun State with 39 sacks and 1,220 parcels of Cannabis Sativa (Indian Hemp) weighing 1, 610. These items were well concealed in between food items like tomatoes, vegetables and so. Comptroller Uba confided that the items will be handed over to the appropriate agency for further investigation in the spirit of inter-agency relationship.

While appreciating the press for the encouragement and cooperation he received from them as his tenure lasts, he pleaded that the same kind of cooperation and more be extended to his successor, who he described as a ‘good’ person.

He further extended his appreciation to the Comptroller-General of Customs, Col. Hameed Ali (Rtd) and his management team for the logistic supports they released which made all the seizures possible and all sister agencies including the army, Police and others for rendering necessary support in the war against smuggling.

Comptroller Uba is due to take up a new mandate at the Seme Area Command.