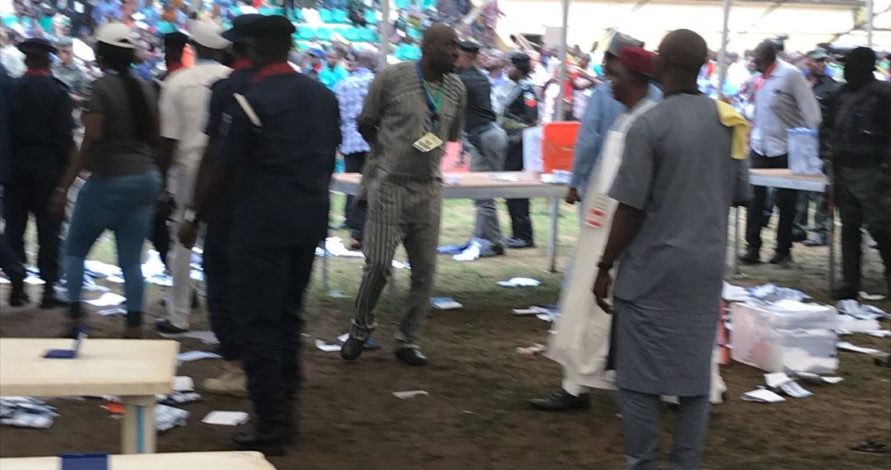 The All Progressives Congress has disqualified party agents seem to have fomented trouble in the botched last Saturday’s Ekiti governorship primary election and ordered that a fresh one should be held on Friday.

This was the outcome of a marathon meeting of the National Working Committee of the party, which was held late on Monday and ended on Tuesday.

The National Publicity Secretary of the APC, Mallam Bolaji Abdullahi, announced the party’s decision at a press briefing at the party’s National Secretariat, in Abuja, on Tuesday.

He told newsmen that the party considered the report submitted to it by the Governor Tanko Al-Makura-led panel sent to conduct the exercise.

Abdullahi also announced that the agents of the aspirants identified as perpetrators of the violence which led to the disruption of the exercise had been disqualified from taking part in the fresh exercise.

He said, “Perhaps, more importantly, is that the exercise of Saturday is cancelled and would now be conducted this Friday, 11th of May, 2018.”

In a response to a question on whether a new panel would be set up to conduct the exercise on the new date, he said, “The existing primary election committee is maintained, except the secretary, who will now be substituted.”

Abdullahi, however, explained that the committee’s secretary was not dropped as a result of any infraction.

He said, “Virtually all the aspirants complained that the secretary has a close relationship with one of their colleagues and so we decided to drop him in order to guard the integrity of the process and not because he was found to have compromised.”

On the ban on agents, Abdullahi said, “All identified unruly agents that participated in the suspended primary election of May 5, 2018, are disqualified from participating in the rescheduled primary as agents.

“All agent tags must bear the names of the aspirants they represent. All the agents in the rescheduled primary election are hereby barred from coming to the voting arena with their mobile phones.”