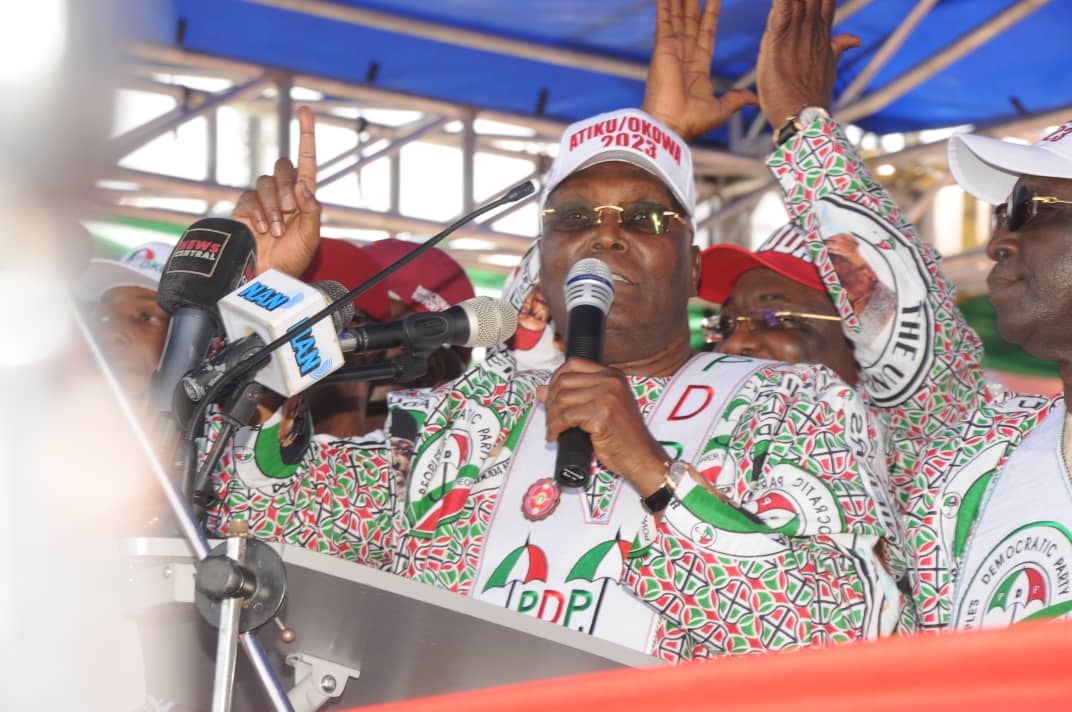 Presidential Candidate of the Peoples Democratic Party (PDP), Alhaji Atiku Abubakar, has promised to ensure the unity of the country, make life better for the people and ensure Nigerian universities don’t go on strike if elected president.

The former Vice President stated this on Saturday at the PDP presidential rally held at the Eagles Square, Abuja.

The PDP presidential candidate promised to release all entitlements of Abuja indigenes, including the much demanded constitutional review.

Atiku praised the loyalty of PDP supporters in the Federal capital territory, saying that the party doesn’t take it for granted.

“We have no reason to believe you won’t support us again.

“We are here to pledge that if you support us we will give you all your entitlement; appointments and other demands including constitutional review.

“In the process of restructuring we will give you all what belongs to you.

On security, Atiku vowed to secure the nation’s capital if elected.

He said, “We shall protect and secure Abuja for your own safety. You know my 5 point agenda, I will unify the county; no part of the country will be left untouched. Peace for everyone. These I promise you”.

Atiku seized the moment to take a swipe at the APC over the ASUU strike which lasted for 8 months, promising the nations universities will never experience strike for ever.

“We have promised education is key for everyone, we will make our universities remain open forever.

He further told the PDP supporters that, “Abuja will be the first to feel the impact of the govt. PDP Will fullfill all the obligations to you. We are not taking your loyalty for granted! We will pay back but not with hunger and insecurity.”

Earlier, the Vice Presidential candidate of the PDP, Dr Ifeanyi Okowa in his address noted that the PDP Is stronger than it has ever been in the FCT.

He told the Abuja supporters that “We need to rescue our people from where the APC has left us, we must work together with youths, women and elders to collectively steer the ship of this country to safe harbour. The people are tired of the APC govt, they are angry and hungry. Nigeria require a man with experience to rescue the country and Atiku is the only candidate that has solution to the problems of this country,” Okowa stated.

On his part, PDP chairman, Ayu told the people that APC has created so much poverty that today NIgeria is the most borrowed country in the world.

He said, “Atiku will continue from where he left off under Obasanjo. We don’t want a president that will deceive you, an experimental president.

“Insecurity has bedeviled the country especially the FCT, if Atiku is voted he will restore security to the country,” Ayu told the gathering.

Aminu Tambuwal, DG, Atiku presidential campaign council, who spoke earlier said, “I am sure you know who the cap fits, he has experience and he is familiar with the people. This team is being led by the unifier, and he his prepared for the unification the country from restructuring to infrastructure. I urge u all to vote the PDP from bottom to top, he said.”

Maeba: Rivers PDP Sues for Peace, Warns That No One Has Monopoly of Violence

Why We Implicated Saraki in Offa Robbery – Suspect