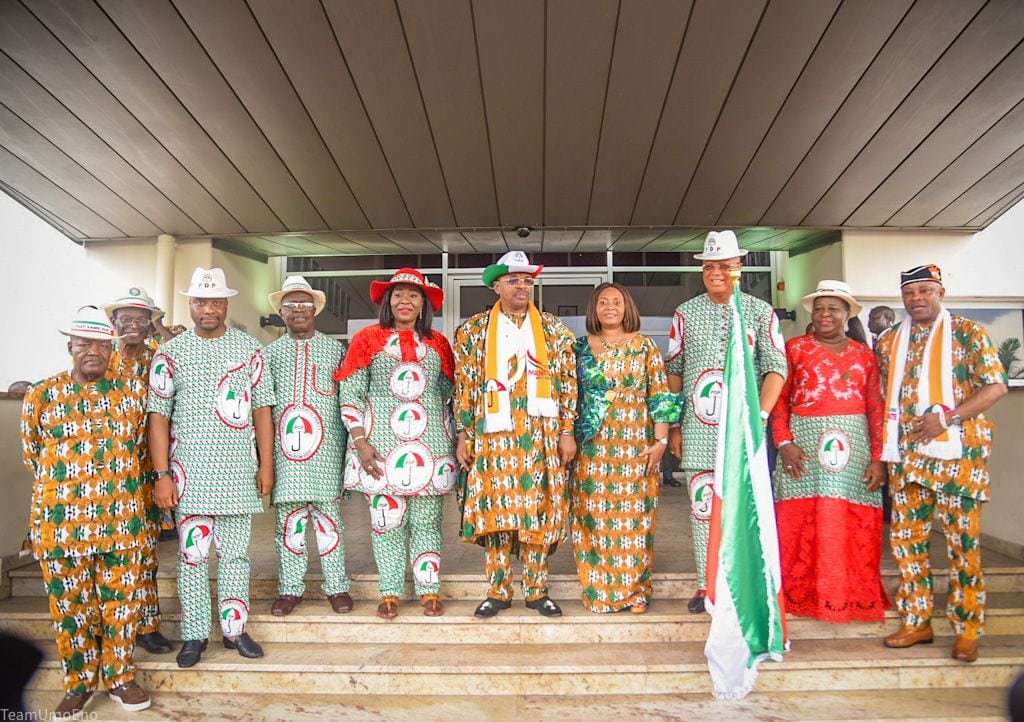 Governorship candidate of the Peoples Democratic Party (PDP) in Akwa Ibom State, Pastor Umo Eno has guaranteed a golden future for Akwa Ibom when elected into office as governor in 2023.

This was contained in his campaign flag-off speech tagged, “my contract with Akwa Ibom people,” and presented at the Nest of Champions Stadium, Uyo.

At the campaign turned revival, Pastor Eno promised to work extra hard to justify the overwhelming support thus far received across the state and beyond.

According to him, “I want to assure you that the future you desire for yourselves and your children is the future I am totally committed to working to make real. I know I can count on you to collectively make this future a reality.

“Let me reiterate that we will strive at all times to be development-focused, prosperity-focused, employment and wealth creation–focused and above all, shaped by peace, security and faith in the Almighty God. We will always lean towards what Abraham Maslow calls “The Human Side of Enterprise” which is the provision of tools that brings about wealth and prosperity.

“Having witnessed the unprecedented pace of development under our dear Governor Udom Emmanuel, I believe, our best way to express our collective gratitude and appreciation to what he has turned our State into, will be to continue from where he will stop, and take it even further , in tandem with our State Anthem of forward ever, backward never!

“This is my contract with you my dear Akwaibomites, and on my honour and with the help of God; I will work to make our State the perpetuity capital of Nigeria. The best years of Akwa Ibom State are not in the past, they are in her future: we have had a beautiful silver past, may God lead us to a golden future, he added.

The governorship hopeful urged Akwa Ibom people to vote for him on grounds of competence stressing, “this election is beyond populism, rhetoric and vague promises but pragmatism, capacity and making hard choices. It is your choice to have a proven leader who has created jobs for many of our youths versus those who only use the youths for thuggery and violence when it suits their selfish purposes.

“This election is about continuity, the need to deepen and expand what already has been planted and turn the seeds into a healthy harvest for our people versus those who wish to turn back the tide of growth, just to satisfy their egoistical desires.

Speaking further he said, “this election is about humility, and Godliness, and the need to respect our common humanity and govern with Christian values, versus those who see power as a sense of entitlement.
Power is given to those whom God has qualified and not those who arrogantly qualify themselves.

“This election is a choice between those who have produced a robust and easy-to-digest Economic Blueprint as we have done through our A.R.I.S.E. agenda versus those who only, daily talk the talk, but lack the capacity and the competence to positively affect lives in the long run. Again, if you haven’t run a kiosk, you can’t run a multinational.

“This election is about giving our citizens a sustainable source of livelihood and not throwing crumbs at them during an election year and leaving them to wallow in extreme poverty afterwards. Running a State is not a learning process; it is not an affair based on trial and error. We cannot gamble with the destiny of about 8 million people and entrust same in unsteady and shaky hands.

“We have proven over the years to be a steady and safe hand, driven by a clear-cut vision of governance, which we have captured in the A.R.I.S.E. Agenda.

He commended Governor Emmanuel for his commitment to state’s developement and promised to further on the trajectory.

“Udom Emmanuel Government has already given us world class infrastructure. We will now use the resources available to build people, attract more industries, create jobs, open up our rural areas and spread prosperity to our people. This is the standard all over the world”

In his remarks, Governor Emmanuel expressed delight at the massive turn out of Akwa Ibom people for the flag off describing it as  amazing and electrifying.

He noted that the ARISE Agenda is well articulated and encompassing to further on the developement of the state, and called on everyone to vote for Pastor Umo Eno and the PDP.

Governor Emmanuel who is the Chairman of Atiku/Okowa campaign committee stated that God had glorified PDP since 1999 to 2019, adding that that same God will arise in 2023.

Earlier, while presenting the candidate, the state Chairman of the party, Elder Aniekan Akpan noted that they had flagged off campaigns in all the three Senatorial Districts and had got confirmation that Pastor Umo Eno will be voted into office as the next governor.

He therefore urged the electorates to vote for PDP maintaining that a vote for PDP is a vote for continuity, prosperity, and advancement in developement of all the sectors of the state’s economy.